Finnish Game Jam selected Panu Akrenius to receive a scholarship to join the InnoGames Jam at the gamescom and represent the Finnish jamming scene. Panu traveled to Cologne, Germany to jam among the 180 participants from 27 countries, and has now returned from the inspiring journey and shares his experiences in this report.

Jamming in Gamescom: The epic mix of work and fun

A very big Thanks to Finnish Game Jam and InnoGames for inviting me to a game jam in Cologne, Germany. I visited Gamescom two years ago, and I thought it was the best thing ever. Now I also had a chance to make games in there. The scholarship meant that basically my flights, accommodation and the ticket to Gamescom would be free. It’s difficult to think of anything as awesome as this.

As I had visited Cologne earlier, I was quite familiar with the city and public transportation. Back then when I wanted to get inside the fair, I had to wait for hours in huge queues, though. This time it was totally different, and I got inside in a couple of minutes, which was amazing.

Before the jam there was a speech by Adriel Wallick about “working for yourself” and “freedom paralysis”, which I am quite familiar with, having “suffered” it for quite a while. It can be difficult to get productive when you have to make up your own scheduling, and when you’re in charge of your own work.

The jam started with traditional games that helped the jammers to get to know each other. Depending on the personality, it was probably either fun or awkward. For me it was a mix of both, but these games were very important for me to “break the ice”.

The theme of the jam appeared to be “masks”. People were asked to gather in four groups according to their jamming interests: single-player, multi-player, mobile and experimental. I ended up mingling around in the multiplayer corner, after which I got in a team that was going to create an arena-style game. I was to create the sounds and music for this game.

Creating sounds for the game was a bit of a positive challenge, because of the very limited amount of different sound samples that I had on my computer. I created sound effects mostly by using just a lot of different effects on drum samples. I had to create sounds for several types of elements, such as fire, ground, water, wind, lightning and so on. The end result was a bit experimental, but I was quite surprised how the sounds actually resemble a little bit what they were supposed to sound like.

Creating music was also somewhat a challenge, because I was not so sure about the visual style and pace of the game. At the very beginning I thought it was going to look a bit medieval, and in the end it did. The game pace was a lot faster than I thought, though. For the music I got to study some of the new software instruments that I’ve got into my hands recently, which was good. 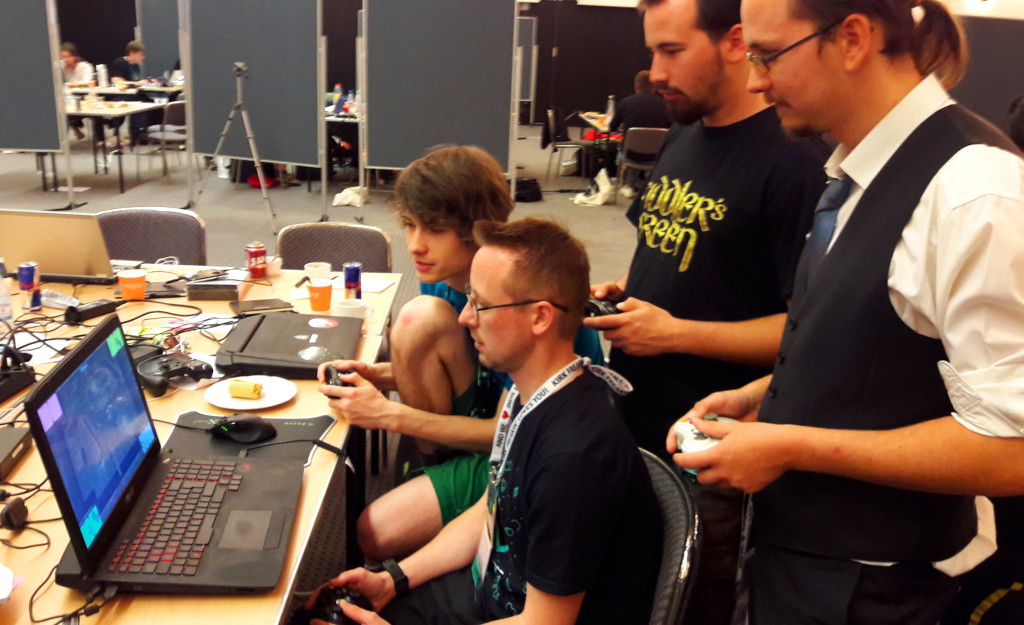 I also felt that I would have time to create music for some other project as well, so later in the first jam day I looked around if there was some team that was missing a music composer. I found another arena-style game with very colorful graphics, which immediately inspired me. The team also thought that it would be nice to have different layers of music that would play according to what items the playable characters had. This type of adaptive music was something that I was hoping to do, so it was nice to have a chance to do it. 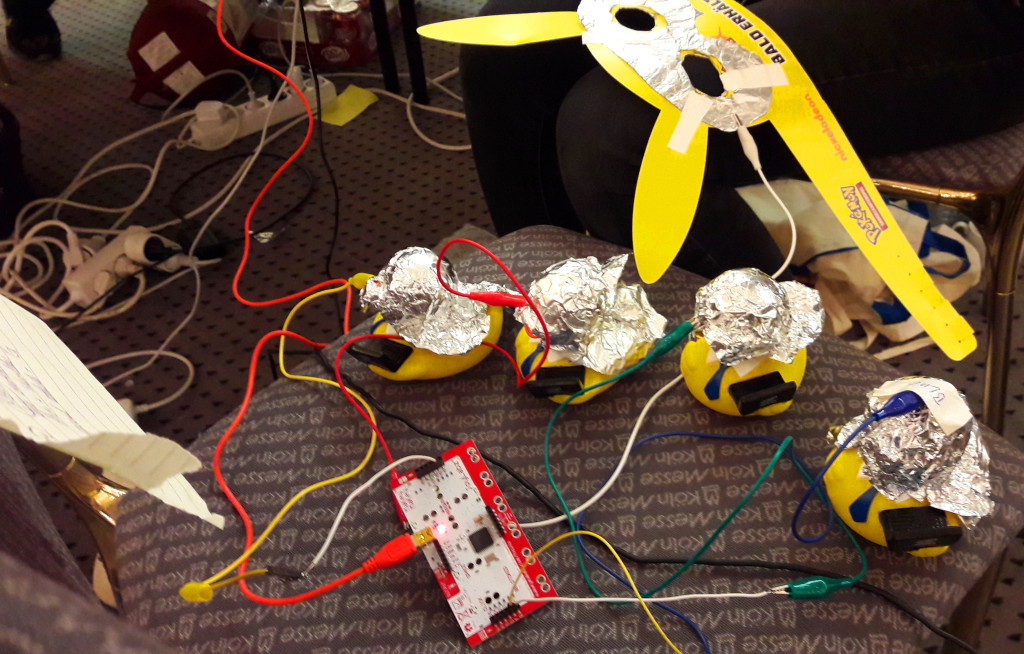 Besides working I spent a lot of time just looking how other hobbyists and professionals work, since I found it fun and interesting. I also talked to certain people about their work, which was quite inspiring.

Each day I would also have fun just walking around the Gamescom, which I think is one of the best things I’ve ever been to. I didn’t feel the need to go inside any of the big booths to see the latest games, since I find it rewarding to just look, listen and walk around. I had to use my earplugs, though, since obviously the place is quite loud and I don’t want to harm my hearing.

I probably liked the retro-area on the top floor the most. There you could find old consoles and games, and even new games for the old consoles. I also liked the shopping area, where you can see all kinds of crazy fan products. 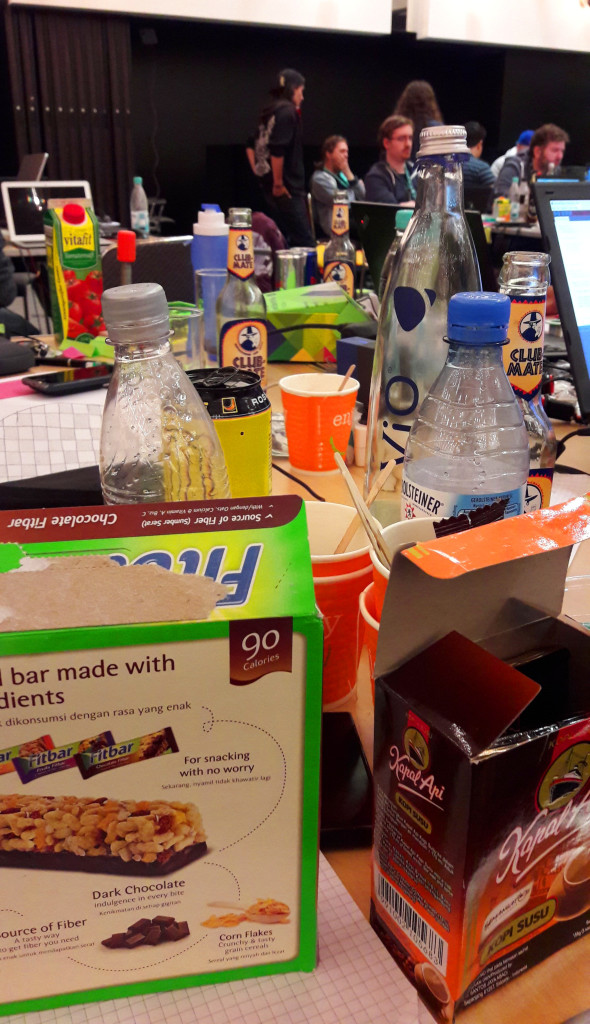 A special thanks for all the sponsors, who gave us food and also some other goods during the jam. I was expecting that I would have to buy my own food, but in the end the sponsored food was mostly sufficient. I also gave myself the special permission of enjoying free coffee and soft drinks daily, just for the duration of the jam.

The jam ended with an awards show, where some of the interesting jam games were given recognition. The following night I flew back home. In the end it was good to be back in colder, quieter and not-so-crowded Finland. Visiting Cologne was very refreshing and uplifting, but at the same time a very exhausting experience.

Working with talented people in a creative environment was energizing, and it’s something that I’m still dreaming of doing more professionally. This was the biggest game jam I have attended so far, and I think in the next one I will be focusing on more experimental game projects.