Week in a castle 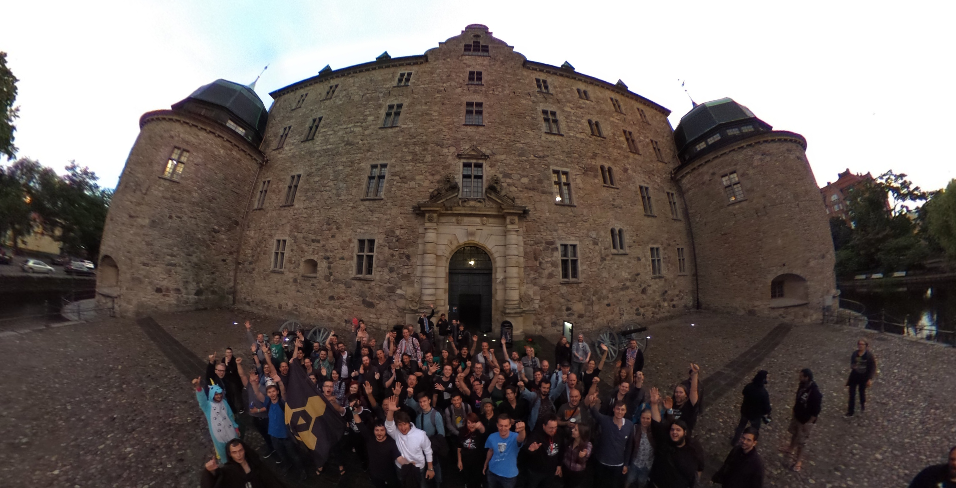 Back in 2015 Newnorth technologies had this crazy kickstarter project of doing a game jam in an actual castle. I hadn’t noticed the kickstarter in time, but luckily for me Finnish Game Jam association had an extra ticket for their scholarship. Big thanks for letting me be the one to get to jam in a castle! The jam differs from usual jams not only by its location but also by the length of the event. Jam started on Sunday with a pre-party and continued with lectures and group forming on Monday. From that point on it was jamming until Saturday morning.

The actual castle where the jam took place was the beautiful castle in Örebro, Sweden. One of the prettiest castles there is. Getting there was the first challenge. Basically I had two options, either fly to Stockholm and get a train from there or enjoy some seas on a ferry. I decided to go with a ferry from Turku to Stockholm. Good time to relax for a bit before weeklong development. The ferry arrived to Sweden around 7am so I had plenty of time to get to Örebro. Got there around 1pm after a bus ride to Bålsta and from there a train to Örebro. Pre-party was to start around 4pm so I walked around and had a bit of sightseeing. Town seemed really awesome place to live in. Lots of small parks, river crossing the town and forming the water basis for the moat around the castle. One thing that surprised me was the amount of bikes and bike parking stations. After talking to one of the locals later on I found out that Örebro even calls themselves “Town of cycling”.

Pre-party was held in a nearby park. I got there a little bit late due to waiting for the rain to stop. I was a bit surprised when I got there, for there was only 2 other people in addition to me. Both of whom were also a little bit surprised that there was no one else there. After some chatting and checking if the spot was correct we found out that time tables were a little bit off due to last minute changes in accommodation. Not a long time after that a fourth member joined our merry little group. An hour after that a lot more people came and brought the sun with them. Pre-party had an amazing swordfighting demonstration by Örebro HEMA (Historical European Martial Arts). Real longswords and swordfightning is a lot different than what they portray in the movies. Afterwards it was hot dog time with some Coca-Cola and Swedish mellanöl.

Monday morning began with an awesome breakfast at the Elite hotel where I was staying. The hotel was just a stone throws distance away from the castle. I could even see it from my window when looking from correct angle. The lectures started around 10 and I was glad to see lots of people I had chatted with the day before. They had 3 different rooms for lectures and most of the time there were overlaps so I couldn’t see everything I wanted to. There were a few really awesome talks; demoscene talk by Troed Sandberg and Massive prototyping by Henrik Jonsson just to name a few. They were filming the talks so hopefully they will be available for public in the near future.

After the talks were done it was time for the themes. Castle Jam differs a bit from Global Game Jams in the theming aspect. In addition to main theme they had additional themes for each “part” of development: design, art, sound and programming. The additional themes worked a lot like diversifiers in Global Game Jams as they were completely voluntary to use. The themes were chosen by the jammers by filling a form before the jam started. The main theme chosen was “Dimensions”. In addition to this they had “Castle”, “Floating Islands” and “Inside strange object” for design. “Dynamic”, “Vocal sound effects” and “Chiptune” for audio. “Low poly”, “Minimalistic” and “Abstract” for graphics. “Alternative physics”, “Procedural generation” and “Rhythm based” for programming. Got a lot of ideas flying around when the talk was done and it was time to form the groups. Originally the group forming was supposed to be done online but the tool to be used wasn’t finished in time so groups were done based on peoples interests. Four rooms were assigned for people wanting to do VR, 2D, 3D and one for “everything goes”. This was one the biggest disappointments for me during the whole jam as I’m not really used to deciding group by people but rather by the idea. After a while in the general room and talking with other people I talked with Andreas Wilcox, whom I had met already at the pre-party and got an idea of bending physics like in the movie Wanted and combine that with Superhot visuals. Soon after Mateusz Pilski joined in and we formed a team of three programmers.

Having talked a bit about the idea it became clear that we needed at least one graphics artist/modeler/level designer in the team. Trying to find people at this point was much harder as many already had a team, luckily in the 3D room things hadn’t gotten by as quickly and we found Julius Sandgren and Erik Häggström to fill the missing spots. The team ended up being very international with people from Finland, Poland and Sweden. At this point the castle was still closed due to table building and network cables being setup so we went to the nearby park to talk about the game and the themes. When the idea got to a consensus point we basically had the following: A fps game with puzzle elements having gravity fields that you need to operate in order to find your way from underground to topside of the planet just to find you’re under a dome and the whole part of the planet is basically a flying island. This changed a lot of course during the jam as is customary.

We got to the castle after a snack at the local Burger King around 10pm. After the computers were set up there was one big problem. Wi-Fi access points had reached their maximum capability and we were missing a few network cables. Swapping cables whenever someone needed internet was the solution and the next day Andreas brought extra cables so the issue was solved and development was on full warp speed. The roles for the development were easily determined. Erik is a graphics artist so he decided to do textures and other graphics needed and additionally did the sound effects. Julius went for the modeling job and that left me, Andreas and Mateusz to share up on the programming tasks. Mateusz took the part of creating support for gravity fields in the unity physics engine, I went for the visualizations required to show the fields and Andreas started on gameplay. First day ended great, after mere 4 hours of development we had a character moving with colorful bullets flying and the first gravity fields were forming up. Time for some sleep at this point.

Second day I started to visualize the fields. This proved to be a lot more difficult than I thought. After banging my head to desk for 6 hours we had a dinner and I decided to give a last try to getting the fields look cool. Luckily there was a great article in the Unity blog about a new feature in Unity 5 called command buffers. This was just the thing I needed to get the fields have this localized distortion effect. In addition to visualization efforts the first models and sound effects were also popping up around at this point and we could start to see how things would work. The alternative physics started to be in working condition at this point also.

Sometime during the second day it became pretty clear that the bullets wouldn’t work as they were traveling way too fast. Time for a meeting to re-evaluate some of the goals and figure out what Mateusz should do next as the physics were done a lot faster than anticipated. Went for a little bit quieter place in the castle deemed “Relax room” with lots of consoles and other games. Meeting ended great and common thought was to ditch the fps part of the game and go fully to puzzle mode. Next few days went on really smoothly with game starting to look a lot more like a game rather than generic Unity physics playfield.

In the morning of Thursday I was really proud to present a level I had made after most of the others went for sleep. The level was deemed to be too hard to be a first level so it ended up being the last level. Which was great for I had this vision of an asteroid hitting the ground in the game and I got to do something even better in the last level. Player pulling a moon to hit the spaceship. We had few people from other teams have a go at the level and got some really valuable feedback. Next up: puzzle designing and level building. Thursday and Friday consisted mostly of testing, iterating, building levels and bug squashing.

Development ended on Saturday 10am and the desks had to be cleaned for the presentations. This is something that differs a lot from how stuff is done usually in Finnish Game Jams. There were no actual presentations but each team took one computer and set it up to showcase the game. Then people from Örebro were invited to the castle to play the games. Also other jammers had the chance to actually have the time to go and play other games. One thing that surprised me a lot during this time was that many games looked really polished. It’s a wonder how much 60 hours more development time can do to a game. In total there were 65 games made during the jam. I had the chance to test around 15 of them. Helmetfall, Toran, Wizard olympics and Tortuga skies seemed really nice just to name a few. Of course our game Dave’s Theory of Gravity is also awesome!

This report ended up being a lot longer than what I had set for while starting writing, so here’s a TL;DR for those in a hurry:
– Castle game jam took place in a castle of Örebro, Sweden.
– Jam lasted for a week with actual development time of 4½ days.
– Main theme “Dimensions”.
– Jamming in a castle is as awesome as it sounds.
– We made a game called Dave’s Theory of Gravity.
– Quality of games surprised me as many were really polished when compared to 48h game jam games.
– Big thanks for FGJ and Newnorth technologies for making this possible for me!
– Jamming is awesome.

And for those who cannot read or do not want to. Here’s a 360 timelapse video of my trip to Sweden:

And if someone wants to see some actual development progress. I took a screenshot every 60 seconds and composed a video from that. Check it out here: