Finnish Game Awards has awarded Finnish Game Jam ry as the Sensation of the Year 2014. FGJ ry was praised for its importance in promoting the hobby scene in the game development ecosystem. In 2014, the amount of both locations and jammers increased substantially, and the FGJ Bus was an interesting addition to the whole.

We want to thank all the volunteers organizing the events as well as all the jammers participating in them. A special thanks both to the national and local sponsors making it possible to keep the events mostly free of charge. Finnish Game Jam would not be possible without you all.

Love and jam on! 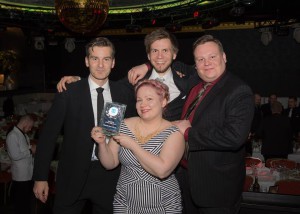