On Friday after the jam all the games will be available for public to play in Vapriikki museums.

Registration is now open in Eventbrite. See you in Vapriikki!

The Finnish Museum of Games showcases the Finnish gaming culture in a versatile manner and tells the story of how digital gaming in Finland started and developed over the years. In addition to digital games, the museum also talks about board games and role-playing games.

Tarinat peliin (Stories to Games) is a development project which aims at bringing museum professionals and game industry professionals together and creating games based on real stories. The project is executed by The Finnish Museums Association and Kajaani University of Applied Sciences. The project began on May 2017 and will last until December 2018. 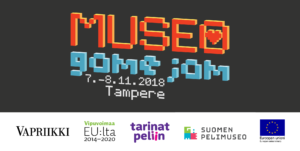